THE WINNING MARKETING STRATEGY OF KFC

You are here:
Marketing 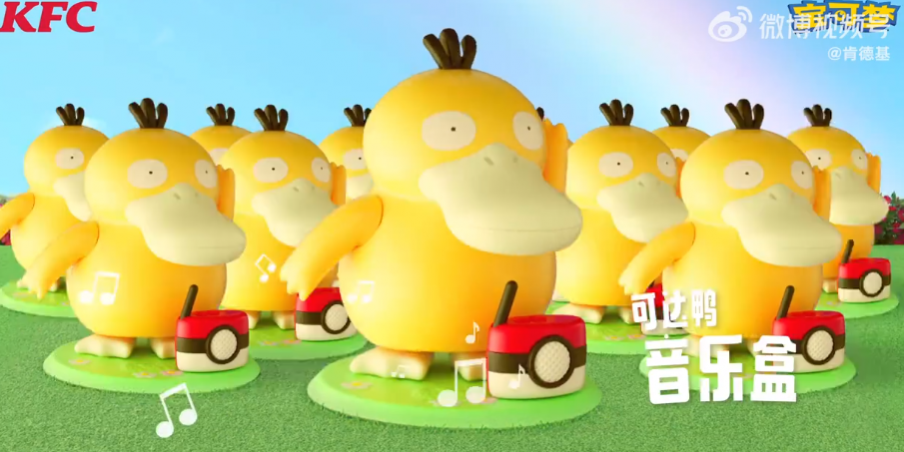 On the occasion of Children’s Day, KFC China gave away three new Pokémon toys, including this cute Psyduck.

Psyduck comes from KFC, the well-known fast food chain, which has collaborated, as in the past, with The Pokémon Company International for the anniversary of the children’s day on June 1st. Three gadgets were distributed in China, two of Pikachu and one of the yellow duckling, which attracted the attention of many collectors.

The Pokémon Duck through a mechanism is able to dance and move its paws on a platform, while in the background a radio in the shape of a Poké Ball sings a song.

These peculiarities have allowed Psyduck to steal the show from the two Pikachu, becoming the protagonist of many memes around the web.Some unscrupulous trainers are attaching pieces of paper to the Psyduck, and using its dancing capabilities to promote… whatever they want, basically. Given that a single KFC Big Bucket Meal in KFC China right now will give you two Pikachu toys – as well as this jiving duck – it stands to reason that some fast food-enjoyers in the region stand to make a lot of cash from the toy.

The exclusivity of KFC China’s Psyduck, already sold out, has allowed retailers to offer it at exorbitant prices, reaching around € 200 per toy. The gadgets could be purchased individually through a surprise, otherwise there was a bundle that included a container and the three Pokémon, with stickers depicting Jigglypuff and the aforementioned Pikachu and Psyduck.

This is not the first time for KFC toys to become a national symbol. During the first month of this year, KFC came out with limited edition blind boxes in a collaboration with Chinese toymaker Pop Mart. To get one of the dolls, customers needed to buy a 99 yuan (US$15.5) family set meal. In order to get all of the six collectible dolls, including the rarest ones, customers would start buying many meals just for the dolls. As reported by SCMP at the time, one customer went as far as to spend US$1,650 on a total of 106 meals to collect all six dolls.

KFC is the most popular fast-food chain in China. People outside of China are sometimes surprised to find that KFC is so hugely popular in the mainland.

As explained in the book written about KFC China’s popularity (“Secret Recipe for Success“), its success story goes back to 1987, when the restaurant opened its first doors near Tiananmen Square in Beijing. Some reasons that contributed to KFC’s success in China are the popularity of chicken in China, the chain’s management system, the restaurant’s adaptation to local taste, and its successful marketing campaigns.